News Release: What Is Discrimination If Not This? 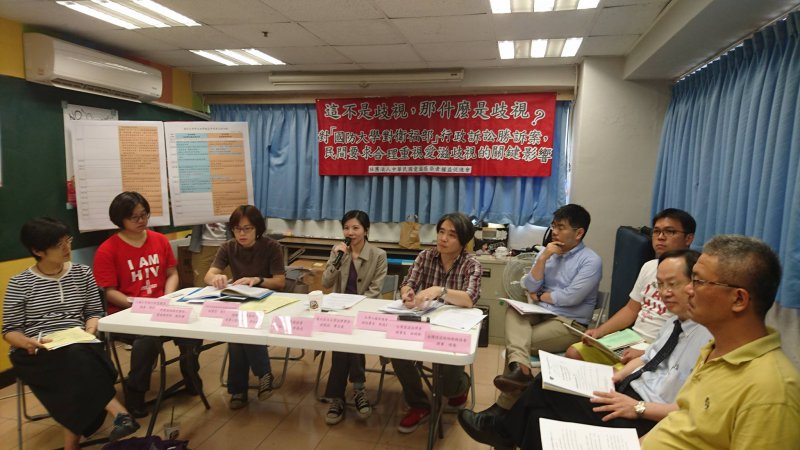 What Is Discrimination If Not This?

1.    The Student’s HIV-positive status was discovered

In early 2012, during a school physical examination, Student A was discovered to be HIV-positive.
The Student’s case was reported to the National Defence University (NDU) by the Armed Forces General Hospital (AFGH) without the consent of the Student.

Upon learning of the Student’s HIV status, NDU commenced a series of actions aiming to force the Student into withdrawing from the institution.  These actions included weekly meetings with the Student, under the pretence of ‘care’, but intending to persuade the Student into a voluntary withdrawal from NDU; offers of accompanying the Student in informing his parents; requests for separate washing of his food trays and clothing; a ban on the use of the university swimming pool; a request to the Hospital for an official certificate of HIV diagnosis without the consent of the Student, among other acts.  The NDU’s actions harassed and marginalised the Student, disrupting the Student’s study and detrimental to the Student’s sense of self worth.

2.    The Student was expelled

The Persons with HIV/AIDS Rights Advocacy Association of Taiwan (PRAATW) became involved in providing assistance to the Student as the situation developed.

In addition to providing support to the student in coping with the intense pressure from the University, in March 2012, PRAATW also informed NDU about the illegality of demanding that the Student withdraw from his study on the basis of his HIV status. However, NDU’s conduct toward the Student remained unchanged.

In September 2012, a petition was submitted to Centre for Disease Control (CDC) by PRAATW.  In the same month, based on a “reporting”, the University searched and seized an unauthorised laptop from the Student.  The Student was then charged and penalised with student misconduct.

The allege student misconducts included breaking the information security rules, exhibiting insolent attitude and behaviour toward his teachers and seniors, and failing to serve as a role model in his role a cadre.  NDU determined that as a consequence, School Points should be deducted.  The approach to deducting student points is highly problematic, as it led directly to the Student’s expulsion.  NDU adapted a method of calculating the student’s semester grade by combining performance scores from previous semesters into one and then disproportionately modify them with added weight values to his deducted points.

The documented events indicated that NDU used information security and related issues as a way to justify the expulsion of the Student, who NDU in fact wanted to leave the institution for a very different reason: the Student’s HIV status.

Given the failure of its ‘soft persuasion’ for a voluntary withdrawal, the severity of the information security offence was then magnified and used to establish a case for expulsion.

As internal aid channels were being sought by the case, the University rejected discussions about HIV, arguing protection of Student’s privacy, instead, centred the case on information security and other related incidents.

With regard to external aid support, in 2013, PRAATW assisted the Student in filing for an appeal citing the HIV Regulations of Taiwan.  However, after some deliberations, the local Ministry of Health decided that an appeal could not be established.  In May of 2014, Ministry Of Health and Welfare’s (MOHW) Appeals Reviewing Council concluded that an appeal could be established.
In July 2014, MOHW demanded that NDU reinstate the admission status of the plaintiff or proceed toward a settlement with the plaintiff as a step towards improving the condition on its campus within three months of receiving the official notification.  The University rejected the MOHW’s demand and filed an appeal with the Executive Yuan’s Appeals Council.

The University’s appeal was turned down, citing “excessive manipulation in achieving its goal of evicting those living with HIV [from the University] and hence does not comply with the principle of proportionality.” MOHW citing the decision of the Executive Yuan’s Appeal Council, demanded that the University improve its condition.  The University responded that it would pursue their case through the court system.

In March 2016, Taipei High Administrative Court handed down its judgement against MOHW on the basis that the expulsion took place before the appeal at the MOHW was established.  As such, according to the court, to demand the University improve or reinstate the admission status of the Student does not meet the standard of law.

4.  The decision of the Taipei High Administrative Court

In deciding this case, the Taipei High Administrative Court drew its conclusion based solely on whether or not the norms and regulations complied with administrative procedures. It sidestepped the issue of “HIV discrimination”, which formed the core of this case altogether and ignored the actual damage and negative impact to the Student.

It exemplifies a legal system that is riddled with disease of hollowness, and worst of all, it has descended into the realm of being a shelter for discrimination.

We believe that as one of the mechanisms for providing legal redress in the country, the Administrative Court’s evasive attitude, using procedural standings to diminish the essence of the case, risks setting precedent for how future cases, similar to the one on hand, will be decided.  We do not believe that the Administrative Court was founded based on such guiding principles and call for closer examination and discussions.

Civil society groups, on the basis that equal educational opportunities for both HIV-infected and non-infected students, make the following three demands:

NDU citing the withdrawal as personal decision, sought to recover tuition and fees totalling 800,000 NDU from the Student through a separate civil case.  We call upon the Civil Court to consider the discriminatory nature of this case, thoroughly examine the claim and the rationale of withdrawal, and proactively provide the necessary legal protection to the Student.

We call upon NDU to pay greater attention to the educational rights of HIV-infected students and support the Student in completing his study.  Being HIV-infected does not mean the Student lacks the physical and mental capacity to meet the military training requirements or preform assigned duties.  HIV cannot be transmitted through group living and any accidents should be responded to with standard emergency procedures.  Under the premise of proactively protecting personal privacy, being HIV-infected has no impact on the Student’s ability to complete his study.

Lastly, on behalf of the Student and his family, we send our sincere appreciation to the support we have received thus far from individuals, representatives of various sectors, experts and also those who will be lending their support to our work as we move forward.  This is the first legal case of HIV discrimination in education- or simply, an HIV-positive student fighting for his right to education.  We need the support of everyone from the society to ensure that Taiwan’s progress and success on moving toward the ranks of matured and progressive nations is not built by sacrificing the future of one of its children.

Attachment: Time table ( Chinese )( download through “附加檔案” on this page )